I received, much to my delight, a hardcopy of Beasts & Barbarians for Christmas.  I like!  I hope I get to put it to use soon.
Posted by Narmer at 11:44 PM 1 comment: Links to this post

An unfortunate truth is that I rarely play the games that I love, or any others.  There is always something going on.  I'm tired from work or I get off to late.  I don't have a day off.  My gaming group (i.e. my two boys) has homework to do or they are playing video games.  Video games are actually a biggie.  It's hard to compete with video games.  So, I was thinking of ways to actually get them to play as well as minimize prep time for me.  I have also been looking at Mazes & Minotaurs again lately.  The Bronze Age calls to me.  So, I had an idea.....

It's not a new idea for me but I like it.  I think I will run a saltbox campaign.  Here's the setup.  (Though I originally thought of this for Mazes & Minotaurs, I may end up changing systems.) 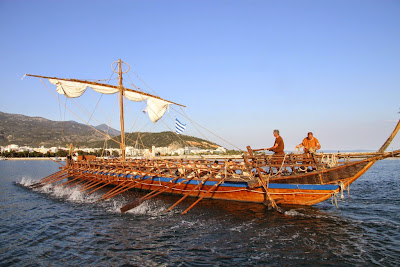 Ten years ago the king of Thena established a colony across the wine-dark sea.  He chose a leader who planted it on the northern coast of the Umbrian Sea to the east of Umbria.  Though the colony is politically independent, it has maintained ties, particularly commercial ties, to Thena and the king.  However, no ships arrived during last year's sailing season and the king is concerned.  So he decides to send one of his trusted nobles to investigate.  The characters are part of the noble's party.  What role they play depends on the class they pick.  A spearman could be one of the ten soldiers the king sent for the leader to command.  A noble could be the companion and assistant to the leader.  A barbarian noble would be the noble's bodyguard.  A priest or sorcerer could be the nobles secretary and be used as a supernatural assistance.  And I don't think either of the boys would choose a nymph to play.  The noble is also given the use of a pentekonter and its crew.  Interesting NPCs could include the captain and first mate, certain crew members of dubious worth, etc. 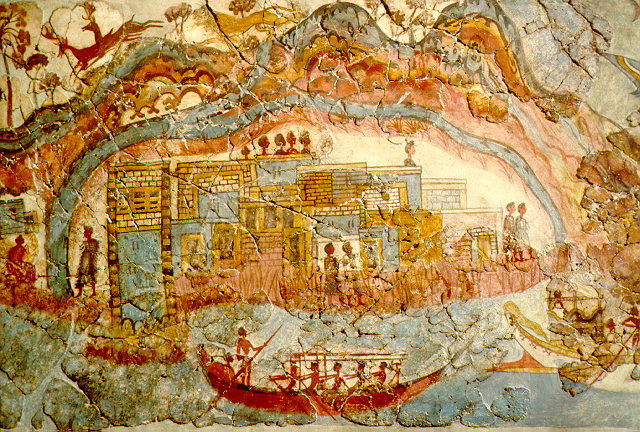 After they set off on their voyage they are soon struck by a vicious storm.  (What caused the storm?  Was it completely natural or has the expedition somehow offended a god?  Perhaps someone skimped on the sacrifices?)  They survive the two day storm intact but now have no idea of their position.  The will soon stop at an island, either by choice or because of short supplies.  And the adventure begins.  Each session could consist of a different island and a different challenge.  If I run out of inspiration I can always use the random island generator in M&M or the one in Agon.  Then, after several adventures or sooner if they lose interest they can finally reach their destination and have to deal with what ever is going on there.  Perhaps the Umbrians took umbrage at the colony's presence.  Or a roving band of northern barbarians are attacking the city.  Or some supernatural force is affecting them.  Or stasis has taken hold because of feuding factions.  There are any number of possibilities.

What do you think?  Any suggestions or criticisms?
Posted by Narmer at 10:40 PM No comments: Links to this post

Happy Holidays and a Christmas Gift to Myself

Happy Holidays to all!

I purchased a couple of presents for myself and I'm anxiously awaiting their arrival.  I bought myself a hard-copy of Far Trek, C.R. Brandon's homage to a seminal t.v. series.  He's only made them available in print twice so I'm glad I managed to get it this time.  I also grabbed Mr. Brandon's conversion of Morgansfort for his HOW system.  I'm excited to have a playground and starting point for HOW.
Posted by Narmer at 4:13 PM No comments: Links to this post