Arak-Aree saw her parents killed by the flatlanders. The Haklaton could not defend themselves effectively. The Wingless raided her aerie, killing the adults and taking the children as slaves. Arak-Aree was sold to a rich merchant from Oomis as a novelty and he gave her to his spoiled daughter as a pet. A first she was just a pet but soon became the constant companion, then friend of the girl. Arak-Aree found life nearly bearable until the girl's older brother began showing an "interest" in her. Wanting to protect her friend, the girl tried to convince her father to free Arak-Aree. The father, a merchant to his very soul, refused to give up such a valuable acquisition. The girl would not relent and found a way to smuggle Arak-Aree out of the city. She made her way to the Axos mountains but with her aerie destroyed she was at a loss. But a fire burned in her heart. She made her way to the mountain top temple of "He of the Rending Talons" and dedicated herself to Him. It was then she took her vow, "Never again." She trained in the ways of war and soon like-minded youth began to gather. She formed the Aerie of the Talons, a society of warriors dedicated to protecting the Haklaton from the depredations of the Wingless.

Boons
Haklaton Agility
Posted by Narmer at 12:59 AM 1 comment:
Email ThisBlogThis!Share to TwitterShare to FacebookShare to Pinterest
Labels: Barbarians of Lemuria, characters

Martos is the the fifth son born to a noble family of Satarla. In a place where primogeniture was the law, this meant that Martos would have to find or create his own place in the world. This usually meant the sword or the cowl. Martos, however, had discovered early in life that he was a coward. He had received training in the sword as any child of nobility would in a duel-mad society. He was fine in training but once swords were drawn in earnest, well, it was a different story. It only reinforced what he knew in his heart: Physical danger unmanned him. He also knew he wasn't a very devout fellow and so the priesthood was not for him. The gods did not look kindly on hypocrites. Fortunately he found a home at the great university in Satarla. Most scions of nobility spent at least some time there and Martos found the intellectual duels much more to his taste. He not only fit in, he excelled. He was a student, then an assistant and is currently a lecturer. He hopes that once he has finished his history of Ancient Qeb he will receive a coveted professorship.

But then the Lord Chancellor gave him a mission. One that could help him achieve his intellectual and professional goals but also one that will force him to face his darkest fears.


I had come up with a bit of fiction to accompany this character. I decided to spare you though.
Posted by Narmer at 11:31 PM 1 comment:
Email ThisBlogThis!Share to TwitterShare to FacebookShare to Pinterest
Labels: Barbarians of Lemuria, characters 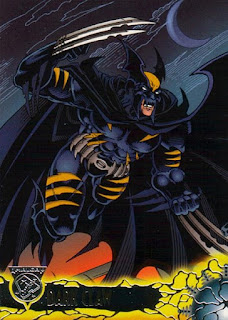 Paladin in Citadel, in response to my Batman post, mentioned that Wolverine was his favorite superhero character. Which makes sense. Wasn't Wolverine originally from Canada? Gotta root for the home team.

Well, in the interest of international harmony, I present Dark Claw. Dark Claw is the product of the Amalgam Universe DC/Marvel crossover, in which the greatest heroes of each universe combined by some strange occurrence that I can't remember. So, Superman and Captain America combined and became Super Soldier. There was also Iron Lantern, Amazon, Spider-Boy and many others. Dark Claw is the combination of Batman and Wolverine. How badass is that?!?

You can find a history of the Amalgam Universe here.
Posted by Narmer at 6:16 PM 3 comments:
Email ThisBlogThis!Share to TwitterShare to FacebookShare to Pinterest
Labels: Batman

I'm watching a documentary on the History Channel called Batman Unmasked. It analyses the psychology of Batman. Interesting stuff. Particularly since he is my favorite superhero.
Posted by Narmer at 12:25 AM 2 comments:
Email ThisBlogThis!Share to TwitterShare to FacebookShare to Pinterest
Labels: Batman 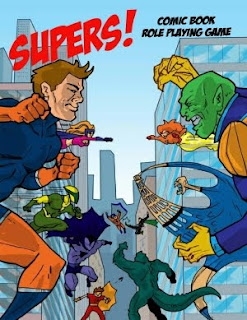 So Mr. Washbourne has been at it again. The creator of the my beloved Barbarians of Lemuria has sent another game to market without me noticing. The game is Supers! This game is another rules-lite offering but is not based on the BoL system. The stats for the characters are rated in dice. There is a thread over at rpg.net which discusses the game and has several sample characters.

Now, the problem is: Which do I buy first? Dogs of War or Supers! Decisions, decisions. And then pdf or hard copy? This will be a delightful problem to solve.
Posted by Narmer at 10:23 AM 2 comments:
Email ThisBlogThis!Share to TwitterShare to FacebookShare to Pinterest
Labels: Supers

According to some sources, this is Bruce Wayne's birthday.

I, for one, will lift a glass of ginger ale to him!
Posted by Narmer at 1:42 PM 3 comments:
Email ThisBlogThis!Share to TwitterShare to FacebookShare to Pinterest

Barbarians of the Aftermath 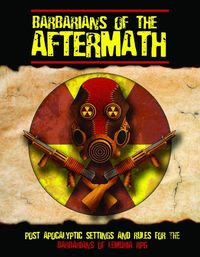 It is time I expand on my previous post about Barbarians of the Aftermath:

I think it is pure-strain awesome!
Or:
It's the bomb!
Or:
Earth destroying goodness.

OK, enough with the bad puns.

As a toolkit BotA allows you to create nearly any sort of apocalypse you can imagine. And also some you perhaps didn't. This book is full of random tables. The book (I have the pdf version) starts out with a set of table to create a random world that has gone through some sort of catastrophic change. This ranges from natural disasters to man-made catastrophes to alien invasion to divine wrath. I grew up rolling up random worlds and characters with Traveller. I spent hours doing this. I loved it. And I really like this. These tables will set the nature, time frame, types of available characters and tech level for your destroyed world. Truthfully, I like to use a semi-guided method of world creation. So, for example, I dislike and have no interest in playing in or running a world destroyed by supernatural powers. So if I roll that as a result, I simply re-roll. But it is great fun. And this is just the first chapter.

The second chapter covers character creation. It has new or modified careers and character types. By character I mean mutants, aliens and various types of humans.

Chapter Three covers the new rules added to BoL by this supplement. Amongst the other things it introduces firearms. This is a very important addition for a post-apocalypse world and it does it in a way that is both simple but adds a necessary bit of complexity. Instead of having the players count every round of ammo, it has an integrated dice mechanism. It is random so you are never quite sure when you will run out. Hope you have some reloads. I like this. It minimizes record keeping, which is in the spirit of BoL, but still makes ammo an important resource. There are also rules for mutations and a nifty vehicle creation section. Road Warrior, here I come. Or Toxic Avenger. Whatever floats you boat.

Chapter Four is equipment. The aforementioned firearms, energy weapons, and various and sundry other gear.

The fifth chapter is entitled "Flora, Fauna and Other Foes." This is pretty self-explanatory. Once again, there can be a random element if the GM wishes.

And chapter Six. Chapter six contains a random adventure generator for those who need an adventure quickly or lack inspiration. I'm usually a victim of both so this is a great help.

The last portion of the book is a Game Master's kit. It contains many of the tables and charts used throughout the book. A very handy tool indeed.

I realize that this has been a rather sketchy review but this resource is filled with such an abundance of material it is hard for me to do justice to it. Suffice it to say that if you like Barbarians of Lemuria and have any interest in post-apocalyptic game play, I don't think you'll be disappointed.

-As a sidelight I discovered a book that is both inspirational and amusing. This is Field Guide to the Apocalypse by Meghann Marco. It is subtitled Movie Survival Skills for the End of the World.
Posted by Narmer at 12:34 AM 3 comments:
Email ThisBlogThis!Share to TwitterShare to FacebookShare to Pinterest
Labels: Barbarians of Lemuria, Barbarians of the Aftermath
Newer Posts Older Posts Home
Subscribe to: Posts (Atom)