Brave and the Bold 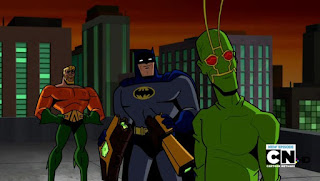 So, I didn't watch Batman the Brave and the Bold much until recently. When I saw the first episode I thought it was goofy. But it grew on me. Now I really like it. And I caught the last episode last night. And it made me sad for some reason.
Posted by Narmer at 11:18 PM 1 comment:

Zoltan Zo is the sixth son of the legendary Zollo Zo of Satarla. As such, he was raised in the lap of luxury and, having no real responsibilities, found his passion and his outlet in hunting. He devoted his life to this pursuit. He didn’t approach hunting in the same way many of the wealthy did, that is, with a huge retinue of professional hunters, brush beaters and servants. He preferred to go it alone or with just a few select companions. He also preferred the spear to the bow. He liked to make his kills up close with the beast’s breath blowing in his face. He became good, very good. He is reputed to be the best hunter alive and his record backs ups the statement. He has chased and killed nearly every major game animal and predator in Lemuria. The more dangerous the better. However, he eventually became jaded and bored. After killing his fifth deodarg single-handedly, he realized that there weren’t any challenges left. He had done it all. His mania for hunting was such that he needed ever greater challenges. Then he thought of the most dangerous of all prey: Humans. However, after abducting and hunting a couple of peasants he realized the unskilled were also no challenge. He soon began kidnapping professional hunters that he despised and hunting them. Most of this was done in secrecy and if any information or hints of impropriety did leak, the influence of Zoltan’s father kept his son safe from any official notice. Zollo was not aware of his son’s activities but wise men did not cross Zollo, so no one dared accuse his son. Eventually, however, Zoltan made a mistake. The second greatest hunter in the land was a nephew of Davym Tarv, the king of Satarla. An attempt to abduct this nephew was foiled and one of the kidnappers told all to the torturers in an attempt to save his own life. Zoltan got wind of his coming arrest and absconded with a sizable chunk of his fathers wealth to a fortified hunting camp deep in the Jungles of Qush. In his arrogance he issued an open challenge to anyone brave or foolhardy enough to try to catch him: “Come get me.”

Fired by greed for the treasure, many, both singly and in groups, have attempted to apprehend or kill him. None have succeeded.

"There is no escape.  I will find you no matter where you hide."

Although this character is created for the world of Lemuria, the character is easily transferred to other settings. I can think of several ways to get the characters involved. Simple greed is the first. Zollo could commission the characters to either capture his son or recover a particularly prized possession that Zoltan stole. The king might (actually probably would) put a large bounty on his head. Or, prior to the discoveries of his activities, Zoltan abducts the characters and they become his prey.
Posted by Narmer at 1:49 PM No comments:

For those of you who may not have heard there is going to be a new Barbarians of Lemuria based game. It is called Honor & Intrigue. It is to be a swashbuckling game in mode of the Three Musketeers. Chris Rutkowsky, 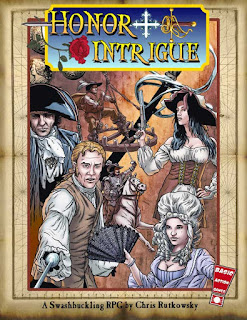 he of BASH! fame, is the author and it will be put out by Basic Action Games.

This game looks like it will be a fun addition to the Barbarians family. And, being the fan that I am of the system I am sure I will get it. The question is, do I pre-order, or get it later?

If you are interested in it here are some links: