I ran across a blog a while back that I'm really liking.  It is called die heart.  It contains reviews of various rpg products that I find helpful when deciding what to purchase as well as resource pages for solo role-playing and a couple of other things.  Check it out here if you get a chance.
Posted by Narmer at 5:19 PM No comments:

Mark Chance of Spes Magna Games posted a really cool character from Eastern European folklore on his blog.  This villainous fellow is a sorcerous giant named Koschei the Deathless.  Not only did Mark write about him but he created stats for Barbarians of Lemuria, Mini Six and three other game systems.  And made it into a free pdf.  Find the post here.  Thanks, Mark!
Posted by Narmer at 11:18 AM 1 comment:

Email ThisBlogThis!Share to TwitterShare to FacebookShare to Pinterest
Labels: Barbarians of Lemuria, Mini-Six, Other Blogs 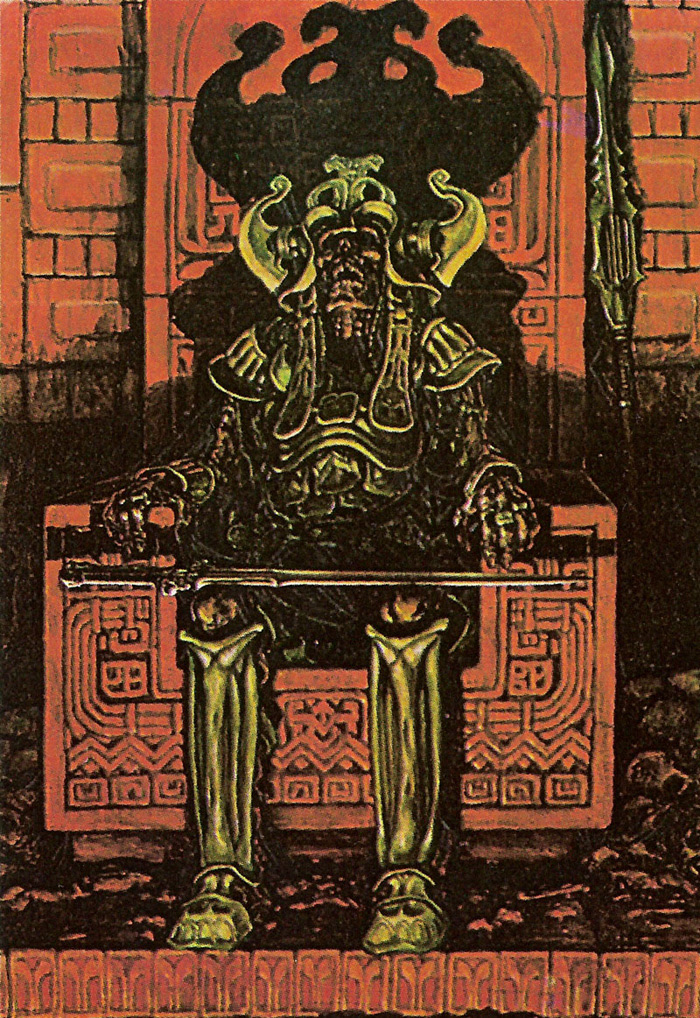 I have a dark secret.  A dark, terrible secret the will brand me a heretic and blasphemer in some corners of the Webs.  Even though this blog is obscure and has few followers, I'm sure word will get out about my transgression.  But it is time.

One of my favorite Conan stories was not written by Robert E. Howard.  There, I said it.  The story in question is "The Thing in the Crypt" by L. Sprague De Camp and Lin Carter.  It was originally meant to be a Thongor story by Carter but was adapted to the Hyborean Age for the Lancer/Ace Conan paperback series.

I originally read the Conan stories in the early 1980's in the Ace paperback edition, as many fantasy enthusiasts my age did.  As I have written before I didn't (or couldn't) distinguish between the Howard pieces and those written by or modified by others.  I didn't have a very refined literary palate and, truth be told, I still don't.  I enjoyed some stories and enjoyed others less so.  I didn't matter who wrote them, only that I enjoyed them.

"The Thing in the Crypt" is one of the small handful of stories that stuck with me through the 30-some years since I first read the paperbacks.  Two of the others are "Beyond the Black River" and "The Tower of the Elephant", both classic Howard stories.  But I've never been able to shake the image of the "Thing" coming to life, the dry rustle of the bones, the thrill of horror that Conan felt.  And thus, it is one of my favorite stories.

So I mention this for two reasons.  One, to relieve myself of the secret burden I've been carrying all these years.  And two, because I am going to blatantly rip it off for the Hyborian Age Barbarians of Lemuria game I am preparing for my son.  It will be the basis for the second scenario I will run him through.

The first scenario will be a not so blatant rip off of "The Tower of the Elephant."  I have done this before quite brazenly but now my son has read the original stories so I will have to disguise it fairly heavily.  The character he will be playing is a thief/assassin from Zamora.  I will start the scenario with the minion of a wizard hiring him to steal an amulet that a rival has stolen from him.  Instead of a tower, the target will live in a mansion with an extensive basement and sub-basement.  There will be guards, servants and unnatural creatures to trick, avoid or slay.  And as he is about to grasp the amulet (if he survives), the wizard appears do defend his property.  If he wins the battle he will be in for a surprise.  It turns out that his employer was actually the brother of the target.  As a game, they would hire thieves to attempt to rob each other.  It simultaneously tests the security of their abodes and sates their sadistic blood lust.  So he will have to kill another sorcerer or run.  If he runs he will gain the Hunted flaw.  It's not a good thing to irk a wizard.

So, for the second scenario, "The Thing in the Crypt" rip off, the character will be captured by slavers after he flees the city.  The scenario will start either with his escape or in media res with the slavers and/or wolves chasing him.  He will only have a piece of chain to fight with.  The chase will lead to the tomb entrance and he will be forced to take a stand or enter the tomb.  When he enters, a little exploration, the sword, the battle against the crypt thing.  Then he has to face whatever is outside.  The best part is that my son has never read the pastiches.  Though in other games I have run every damn skeleton seems to come to live.

All in all I anticipate great fun.
Posted by Narmer at 5:39 PM 3 comments:

"...Troylin should have slaughtered you in your sleep!"
"That's been tried before," returned Kane, swinging to his feet. "Count yourself lucky that I recognized you as a harmless old lecher before I spilled your insides out."

Kane "Reflections for the Winter of My Soul" by Karl Edward Wagner
Posted by Narmer at 12:00 PM No comments:

"...(T)he judge squalled that I had shown contempt for the court, and that I should be hurled into a dungeon to rot until I betrayed my friend. So then, seeing they were all mad, I drew my sword and cleft the judge's skull; then I cut my way out of the court...."

Conan, "Queen of the Black Coast" by Robert E. Howard
Posted by Narmer at 9:36 AM No comments:

I have been following Mr. Brandon's further post and comments on the subject of Blades & Black Magic, his new iteration of Heroes & Other Worlds and very much like what he has in mind for the magic system.  He seems to think along very similar lines to me.  Read about it here.
Posted by Narmer at 3:23 PM 1 comment:

I don't think I mentioned Hereticwerks before.  Hereticwerks is an RPG blog chock full of materials for your gaming purposes.  OSR, Heroes and Other Worlds and more.  Have a look.