My boys enjoy a Nintendo DS game called Scribblenauts. Well, my son would correct me. He actually plays Super Scribblenauts, the second game in the series. Well, this is a puzzle type game where you can write the name of an object or person and it will appear in the game. Then your little character can interact with it. I haven't played it but it seems like a fun little game that poses challenges for the young lads' imagination.

Much to my surprise my oldest told me that he had summoned this creature called Cthulhu. What? I described Cthulhu and he said that it was indeed the creature he had in the game. He then showed me and sure enough there was a little cartoon Cthulhu. He also mentioned the Necronomicon being in the game. 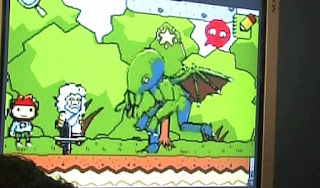 Once again I was astounded. Talk about video games warping the minds of our youths. That, however, is a post for another time.

He asked me how I knew about Cthulhu. I explained what little I know about H. P. Lovecraft, his stories and the Mythos in general. I'm not a huge fan of Lovecraft so the discussion was pretty limited. I did mention, almost as an afterthought, that there is a roleplaying game called Call of Cthulhu. He immediately decided he wanted to play CoC. I don't have CoC let alone any BRP materials other than the free quick start rules. So I printed out the CoC quick start rules and had him read them. So we are going to play at least one session of Call of Cthulhu. I never imagined I would. I have come up with an age appropriate scenario so away we go.

I hope we both keep our sanity!
Posted by Narmer at 1:34 PM No comments:
Email ThisBlogThis!Share to TwitterShare to FacebookShare to Pinterest
Labels: BRP, CoC, video games

I knew Risus had been translated into several languages other than English. I did not know until recently that Esperanto was one of them. I think this is great!
You can find it at S. John Ross' website here.
There is another link here.
Posted by Narmer at 10:06 AM 1 comment:
Email ThisBlogThis!Share to TwitterShare to FacebookShare to Pinterest
Labels: Esperanto, Risus 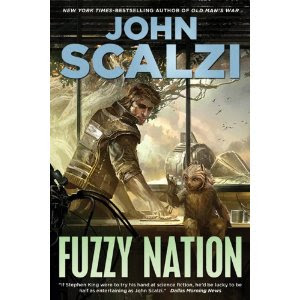 As I’ve mentioned before, H. Beam Piper is on my all time favorite author list. I’ve always wanted to play in a game set in one of his worlds, either the Paratime stories or the Federation/Empire timeline. I have, however, neglected one portion of the Federation/Empire stories. I have only read Little Fuzzy once about twenty years ago. Now, John Scalzi, another author I have come to like, has written a book called Fuzzy Nation. It is my understanding that it is a retelling of Little Fuzzy. So, I am now starting my first re-read of Little Fuzzy. Then I will need to read Fuzzy Nation. And of course compare and contrast.

I haven’t been overly thrilled with Piper sequels written by other hands. Great King’s War written by John Carr and Roland Green did not really live up to the original. It wasn’t a bad book; I just didn’t enjoy it nearly as Lord Kalvan of Otherwhen. Carr has written several more sequels that I have not even attempted to read. There is at least on Fuzzy book written by another author that I have ignored also.

So, some of my future reading list is now determined. And I need to work up some Piper gaming material for my son.

Oh, and I still think George Lucas owes Piper’s estate large sums of money for ripping off Piper’s idea for Return of the Jedi.
Posted by Narmer at 12:42 PM 2 comments:
Email ThisBlogThis!Share to TwitterShare to FacebookShare to Pinterest
Labels: books, H. Beam Piper

My son said the other day, "Wouldn't it be fun if there was a D&D set in modern times? You could take on a dragon a lot sooner with guns." I thought it would be fun. Though I contend that any dragons left around would be even more cunning and powerful in order to survive modern weapons.

This got me thinking about retroclones. We enjoy Labyrinth Lord and I know there are at least two science fiction retroclones (pseudoclones?) as well as one set in a post-apocolypse world but I've have yet to run across one set in contemporary times. I've done a few searches and haven't found one. Does such a thing exist?
Posted by Narmer at 11:35 AM 5 comments:
Email ThisBlogThis!Share to TwitterShare to FacebookShare to Pinterest
Newer Posts Older Posts Home
Subscribe to: Posts (Atom)