For some reason I made a geeklist on RPGGeek.com that lists as many of the Swords & Wizardry variants that I could think of.  I know it isn't complete so feel free to add to it.  You can find it here.
Posted by Narmer at 4:58 PM No comments:
Email ThisBlogThis!Share to TwitterShare to FacebookShare to Pinterest
Labels: Swords & Wizardry 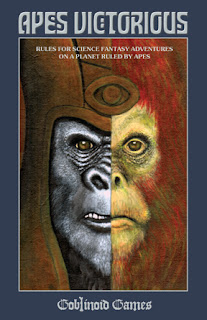 Goblinoid Games has released a Planet of the Apes type game called Apes Victorious.  It uses a system compatible with Labyrinth Lord and Starships & Spacemen.  You can play astronauts or apes or underdwellers.  You can pick the PDF up at Drivethru for less than $5.  Or, better yet if you are unsure about it, you can pick up the free, no-art version from Goblinoid's website.  Grab it here.
Posted by Narmer at 3:39 PM No comments:
Email ThisBlogThis!Share to TwitterShare to FacebookShare to Pinterest
Labels: Labyrinth Lord

Thoughts on a Grimmsgate Campaign

I showed my previous blog post about a Grimmsgate Campaign to a coworker who is also a gamer.  She read it over and had some questions and suggestions for me.  Here are her questions and my replies.  The following may contain spoilers for Grimmsgate. It's funny that she asked the question this way because I don't usually use the term "big bad" but in my notes this is exactly the term I used.  I thought the main antagonist would actually be one of the most powerful minions of the Dark Lord.  When the forces of Law destroyed the Dark Lord's citadel during the last battle the minion was trapped inside when it collapsed and was entombed.  The minion's powerful magic put him into suspended animation and kept him alive for centuries.  About 200 years ago greedy goblins finally mustered up the courage to loot the ruined remnants of the Dark Lord's holdings.  Well, they got more than they bargained for.  The newly released minion gathered his strength for a couple of decades while he built his own stronghold with the newly enslaved goblins.  Then he began using his powers to disrupt the borderlands in order to weaken the kingdoms in preparation of attacking them.  One of his first acts was to compel a certain acolyte to touch a certain jar containing a trapped demon.

Do all races still co-exist in the shattered kingdoms?  Will they cooperate?  Will they help fight the darkness again?
My thoughts are that after the final battle the elves and dwarves withdrew to grieve their losses and rebuild.  They became reclusive and isolationist, particularly the elves.  I find it particularly tragic when elves die for some reason.  Maybe because they are effectively immortal and don't have to die unless they put themselves in harm's way.  On top of this they are slow to reproduce.  I think that death would hit elves particularly hard and make it harder for them to recover psychologically than it is for humans.  The one scene in the movie The Lord of the Rings: The Two Towers that particularly saddened me was the death of the elf commander, Haldir, at the Battle of Helm's Deep.

So I think that the dwarves and elves would be reluctant to join a new war.  Particularly because the elves would've been participants in the first one.  I think it would be interesting if later in the story-arc the characters are tasked with heading up a diplomatic mission charged with persuading them to join the battle again.

The isolationist tendencies would also make dwarves and elves rare in the wider world and thus the object of curiosity and some fear.  Also, as is traditional, the dwarves and elves would be distrustful of one another, adding to the difficulty of any diplomatic mission.

I want to know more about Lord Wulfric's role.
I haven't put much thought into Lord Wulfric's role yet.  I see him as being self-interested but ultimately being on the side of Law.  But at first he will be a hindrance to the PCs because of his self-interest and his distrust of adventurers running around his lands potentially causing trouble.
Posted by Narmer at 10:43 AM No comments:
Email ThisBlogThis!Share to TwitterShare to FacebookShare to Pinterest
Labels: Grimmsgate, Hero's Journey, Swords & Wizardry
Newer Posts Older Posts Home
Subscribe to: Posts (Atom)