Gort was abducted by the Grooth when he was a toddler.  His father was a skilled jungle hunter from Shamballah.  One day he decided to take his family with him for a leisurely hunt in the jungle.  Relaxed and distracted by his family, he did not notice an ambush until it was too late.  Gort's entire family was killed and devoured by the Grooth.  However, a Grooth female had just lost her baby and when she found Gort she defended him against the other Grooths as if he were her own.  From that day on he was raised by the Grooth.  Gort was recovered by humans when he was 14 years old.  His life since then has been one of confusion and tumult.  Unused to human ways he has never fully integrated into society.  When he was older and could return to the Grooth he discovered that his time with civilization changed him so that he could never fully return to his primitive way.  Thus Gort is somewhat of an outcast in both of the worlds that he knows and now, at age 18, he wanders Lemuria using his strength and hunting skill to survive while looking for a place where he can fit in and live at peace with himself.

Gort is tall, brown haired and bearded.  He is well-muscled as strength is valued among the Grooth..  He moves about easily in the wilderness but always seems a bit uneasy in cities.

Posted by Narmer at 7:23 PM 1 comment:
Email ThisBlogThis!Share to TwitterShare to FacebookShare to Pinterest
Labels: Barbarians of Lemuria, characters

27 - Public followers.  Thanks for sticking with me.
21598 - Views.  Wow.  It really surprises me that the number is that high!
2991 - Views of the Dark Claw Post which is the most popular.  The Advanced Fighting Fantasy post is second followed by Barbarians of Lemuria and Star Wars.
1993 - The number of views referred from Tim Brannan's The Other Side Blog.  I don't know why I get so much traffic from there but:  Thanks Tim!  Google is in second place.  I also get a lot of traffic from Jeff Rients' blog.
10405 - The number of views from the United States. The UK and Mexico are a distant second and third.

Thanks for all of the support over the last 2 years or so.  I hope you continue to find my ramblings enjoyable.

Heroes and Other Worlds

The gift-giving season must be coming because the good stuff keeps rolling out.  Mr. Brandon (aka Fenway5 of the Sword and Shield blog) has published Heroes and Other Worlds (development blog here).  I am excited about this as it is based on Melee/Wizard/TFT and I loved that game back in the ancient days.  It even contains a programmed adventure from Dark City Games.  I loved those also.  Unfortunately, because of circumstances I can't pick it up right away.  Sigh.  There is even a coupon for it.  Methinks it will be on my Christmas list though.

You can buy the paperback from Lulu HERE.
Posted by Narmer at 10:02 PM 3 comments:
Email ThisBlogThis!Share to TwitterShare to FacebookShare to Pinterest
Labels: Heroes and Other Worlds, Melee, Other Blogs, The Fantasy Trip

I downloaded Dicey Tales #2 this morning.  Since I am at work I have only been able to glance at it. It contains a G-Man adventure set in Lemuria!  Another reason to be excited about this issue.
Posted by Narmer at 12:04 PM 1 comment:
Email ThisBlogThis!Share to TwitterShare to FacebookShare to Pinterest
Labels: Barbarians of the Aftermath, Dicey Tales, G-Man Adventures 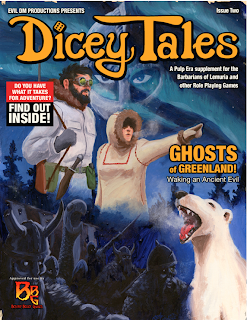 Dicey Tales #2 is out!  I'm so excited.  For those of you who don't know, Dicey Tales is a periodical that supplements and expands Barbarians of Lemuria.  Issue #1 gave guidelines and rules on how to use BoL for pulp games set in the '20s and '30s.  This will definitely be my next gaming purchase.  I was considering QAGS or Barebones Fantasy but they've now been bumped down the list.

You can get more info about Dicey Tales at The Evil DM's blog HERE.

You can purchase Dicey Tales #2 HERE.
Posted by Narmer at 2:41 PM 2 comments:
Email ThisBlogThis!Share to TwitterShare to FacebookShare to Pinterest
Labels: Barbarians of Lemuria, Dicey Tales, Other Blogs

I have read all of Howard's Conan stories in one form or another.  I haven't actually read many of his other works until recently.  I've now read some Bran Mac Morn and Kull stories.  I just finished "The Shadow Kingdom" last night and something interesting happened.  My blood started racing as I read it.  I've re-read several of the Conan stories recently and, with an exception or two, I wasn't as impressed with them as an adult as I was as a teen.  But for some reason "The Shadow Kingdom" affected me in the same way the Conan stories did in those years long ago.  I don't know why.  Maybe it was because I hadn't read it before?  Perhaps.  I didn't find it great literature or any such thing.  I enjoy Howard's work but I don't worship every drop of ink his pen produced as some seem to do.  But I really did enjoy the story and that was refreshing.

(On a personal note, my two favorite authors in the early '80s were Robert E. Howard and H. Beam Piper.  My teenaged mind gave great weight to the fact that they both committed suicide.  Oh, those long ago though processes.)
Posted by Narmer at 2:38 PM No comments:
Email ThisBlogThis!Share to TwitterShare to FacebookShare to Pinterest
Labels: books, Conan, Inspiration, musings, Robert E. Howard

For you fans of Melee and The Fantasy Trip, take a look at this:

The development block is here:

Being a big fan of Melee, I can't wait!
Posted by Narmer at 4:10 PM 1 comment:
Email ThisBlogThis!Share to TwitterShare to FacebookShare to Pinterest
Labels: Heroes and Other Worlds, Other Blogs, The Fantasy Trip
Newer Posts Older Posts Home
Subscribe to: Posts (Atom)