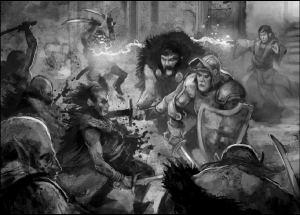 Posted by Narmer at 8:33 PM No comments:

Dragon by the Bay

So, I opened my email up yesterday and what do I see?  An advertisement from Amazon for a new story by Garnett Elliott called Dragon by the Bay.  A post Civil War historical fantasy novel set in San Francisco.

Gritd son of Gritd is a Northerner of the Granite Clan from the Cold Wastes.  He will talk endlessly of the hardships his people endure and how tough it makes them.  And how tough he is.  Truth be told, and this is something he only speaks of when deep in his cups, is that Gritd hates the cold.  He hates the cold, snow, sleet, hail.  He even dislikes cold rain.  As soon as he was old enough to make his way in the world he went south to warmer climes.  He ended up, as many do, in Lankhmar.  Young and naive to the way of civilized folk he quickly became the target of thieves and he lost everything.  Fortunately, he was temporarily taken under the wing of a fellow Northerner name Fafhrd, who taught him how to get by in the big city.  He is a member with good standing in the Slayer's Guild and now makes a comfortable living as a bodyguard for the rich and at times serves as protection for merchant caravans.  He is a good fit for the Slayer's Guild as he is an honorable fellow.  He refuses to attack an unprepared opponent.  Gritd is a large red-haired man with enormous strength.