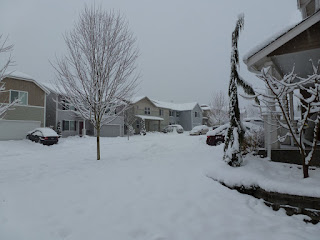 It's been snowing since Saturday. This doesn't happen much around here. Not this amount at least.
The grey sky, however, is pretty common.
Posted by Narmer at 10:03 AM No comments: 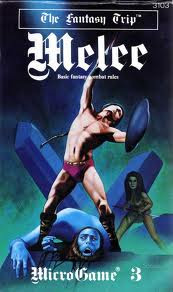 So Fenway5’s very satisfactory effort, rechristened Heroes & Other Worlds, got me thinking about other sources I’ve found for The Fantasy Trip/Melee retroclones. Here are a few.


Legends of the Ancient World www.darkcitygames.com
This is a commercial effort by Dark City Games. The ruleset closely emulates an abbreviated version of TFT and is free. The commercial portion is that they sell programmed adventures ala Death Test. The adventures come in a ziplock pouch with a rulebook, a map and cardboard counters that you cut out. I own Wolves on the Rhine and am very pleased with the components and the adventure.

Warrior & Wizard https://docs.google.com/Doc?id=dcsfz7gv_17fmbxhpfv
This is a retroclone of TFT. The document is a playtest version and comes in at just shy of 50 pages. Frankly, though this is a good effort, I prefer Fenway’s version.

The Fantasy Quest thefantasyquest.com/index.htm
This is also a commercial effort. There is supposedly a game emulating Melee and future releases for Wizard and other adventures and rules. The status of this is unknown, however, because although the Melee clone is offered for sale the majority of the website states that the products are coming in 2009.

If you you know of any other sources for the rules or retroclones or adventures, let me know.
Posted by Narmer at 7:27 PM 1 comment:

Email ThisBlogThis!Share to TwitterShare to FacebookShare to Pinterest
Labels: Melee, The Fantasy Trip

Legends and Other Worlds 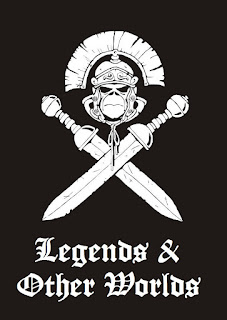 I may have mentioned before that perhaps my favorite game of all time is Metagaming’s Melee. At least through my nostalgia colored glasses it is. Melee with Wizard and the solo adventures was my most played game of all time. I never acquired Advanced Melee, Advanced Wizard or In the Labyrinth for some reason. I did look through a friends copy but we only played it a bit. Consequently my actual role-playing with Melee et al was limited.

Fast forward a couple of decades. I’ve read reviews of The Fantasy Trip (the actual name of the system) and discovered it had some shortcomings. Words like overcomplicated and unorganized popped up regularly. So, despite my love of Melee, I did not track down and pay for the rest of TFT.

Fast forward to about a week ago. I was delighted to discover that the very productive Fenway5 (Mr. Brandon of the Sword & Shield blog) decided to create his own streamlined version of TFT. Take it back to its roots and keep it simple. As he is wont to do, he created a development blog for this project at Legends & Other Worlds, which is also, conveniently, the title of the project. The game is still in development and Fenway has solicited feedback and errata from readers and players. People with much a much keener eye for such things have been helping out with that.

I have not had the opportunity to play-test the game yet but from several readthroughs it seems to have reached his goals. Simple and playable. The PDF weighs in at about 22 pages and will print nicely as a booklet. Fenway has even provided two different covers for it. Just remember to put the cover on the right way before you staple it. I didn’t, much to my chagrin.

The system, for those of you not familiar with it, is a simple one. Roll equal to or under Dexterity or Intelligence (for attacks and spells) on 3d6. Armor reduces damage and weapons have a minimum strength requirement.

There are, however, a couple of divergences from the original. The first is that Fenway attempts to separate LOW from its board-game origins somewhat. He would like it to be playable without the board and pieces if you so choose. Having said that, some of the extras he has created for this are a board and playing pieces. So you can play it how you want it.

The second change surprised me. In addition to the traditional TFT stats of Strength, Dexterity and Intelligence he has added a fourth: Endurance. Steve Jackson added an extra stat when he expanded TFT into GURPS, so Fenway is in good company. The primary reason Fenway did this was to make wizards more sturdy. The original game had wizards subtract the cost of spell casting from Strength. When your Strength reached zero, you died. So, after a couple of spells a beginning wizard could be defeated with a semi-solid hit from a feather. Endurance now pays the price for spell casting. Once Endurance is depleted then spell costs are subtracted from Strength.

In other areas, workable skill and experience mechanics have been included. The skill list isn’t long but it is pretty inclusive of the type of skills an adventurer may need. Experience points drive advancement. You start at first level and when you gain enough experience points you move up to the next level. With each advancement you get the opportunity to increase stats and skills.

Brief conclusion: I was excited when I heard about this project and now I’m excited to get a chance to play the game. I can’t wait. Fenway is continuing to tune the rules so it can only get better. So, if you like Melee or TFT check it out.
Posted by Narmer at 7:12 PM 1 comment:

Email ThisBlogThis!Share to TwitterShare to FacebookShare to Pinterest
Labels: Legends and Other Worlds, Melee, The Fantasy Trip

May your New Year be happy and prosperous!
Posted by Narmer at 12:01 AM 1 comment: