Lothar Liro was born in Satarla to an prominent aristocratic family.  He was a mischievous child, always looking for adventure, often in trouble.  He grew up learning the way of honor and the sword.  As an adult, he tested his courage and skill in duels, several of them to the death.  This wasn't enough.  Also trained as a soldier he wanted the glory of battle.  The problem, though, was that he was living in a time of relative peace.

Thus, when a noble of Tyrus raised a private army to invade Valgard, he joined the expedition eagerly.  Lothar's connections and birth secured him a position as an officer.  Outfitted with the best equipment and several servants and slaves, he marched proudly forth.

The expedition was a fiasco from the start.  Though the aristocratic officers had brought plenty of supplies for themselves, not enough stores were laid in for the common soldiers.  The General prepared for neither the trip up the river through the steaming jungle nor the icy conditions of the pass through the Axos Mountains.  By the time they faced the Valgardians, the force was in a shambles.  The ragtag army was caught by surprise at the foot of a ridge.  The Valgardians poured down the slope like a wild tsunami.  The General tried to deploy his soldiers but was too slow.

Lothar watched the approaching horde with growing fear.  He had faced death before but this was something completely different.  His bowels turned to ice, his legs became weak and something snapped inside him.  He ran towards the rear.  Lothar knocked one of the few cavalrymen off of his mount and raced South.  He rode until the poor beast died of exhaustion and then walked until he collapsed.  When he awoke he was being cared for by some kindly villagers who lived far south of the battle.  He knew in his heart he had done the right thing but felt an overwhelming shame.  Even when he he heard that the expedition had been almost completely massacred, except those who survived to become sacrifices to the fierce Northern gods, he felt ashamed and worthless.  He began drinking heavily in an attempt to kill his pain.  It is not working.  He now wanders Lemuria under a nom de guerre working as a mercenary, his only friend a flask of strong wine.

Posted by Narmer at 6:24 PM No comments:
Email ThisBlogThis!Share to TwitterShare to FacebookShare to Pinterest
Labels: Barbarians of Lemuria, characters

Hatin' on the Halflings

Hatin' on the Halflings
Dissin the Dwarfs
Effin the Elves

However you want to put it, I am getting more and more annoyed with demi-humans.  That's right, you heard me, Hobbits!

As the few of you who read this blog know, I am big into the Sword & Sorcery mode of RPG playing.  I love me some Barbarians of Lemuria both for the simplicity of the game itself and the S&S atmosphere it achieves.  Sword & Sorcery to me is human-centric.  Magic is unpredictable and powerful, drawn from sources 'man is not meant to know' and wielded by sorcerers corrupted by those powers.  Whatever nonhuman races there are are secluded, inbred and dying out if not extinct except for the specimen the hero is facing.  The world is fragmented and probably scavenging the bones of a fallen civilization.  You get the idea.  It can be pretty dark.

There have been several discussions about this subject scattered about the Internet.  (Here's one.  Here's another.)  One common response is to cite Elric as a counter-example.  He's an elf!  He uses powerful magic!  Which is true, but then again, he was specifically designed that way.  He was created as the antithesis Conan.

Which brings me back to demi-humans.  I guess it is me bringing my view of reality into fantasy.  It boils down to this:  Humans have never been capable of living in peace.  There are always disputes, fighting, wars and slaughter.  Sometimes over the smallest things.  If you add in things like scarce resources, cultural differences, appearance, religion and the plain desire for power you have a mound of bodies that stretch back into prehistory.  Now add in groups of humanoids that are utterly alien in appearance and outlook and you are asking for trouble.

I am sure there are novels and stories in which the various groups are at each other's throats.  You even see some of it in Tolkien with the antipathy that elves and dwarfs have for each other.  But often the relations are, at worst, uncomfortable.

So I prefer my fantasy to have demi-humans be rare or nonexistent.  Mysterious and probably antagonistic NPCs.

Down with the Demi-Humans!
Posted by Narmer at 12:10 PM 2 comments:
Email ThisBlogThis!Share to TwitterShare to FacebookShare to Pinterest
Labels: Barbarians of Lemuria, Sword and Sorcery 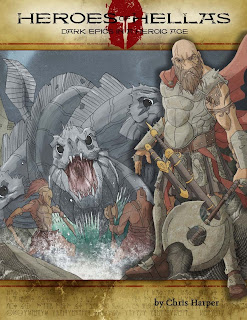 Heroes of Hellas is out!  I've been waiting for this one.  The Barbarians of Lemuria rules set combined with Heroic Age Greece.  I can't wait to get this!

You can get it here.

You can see some of the art on the artist's blog here.  I really like the illustrations I've seen and am looking forward to seeing more.
Posted by Narmer at 2:20 AM 4 comments:
Email ThisBlogThis!Share to TwitterShare to FacebookShare to Pinterest
Labels: Barbarians of Lemuria, Heroes of Hellas, Other Blogs
Newer Posts Older Posts Home
Subscribe to: Posts (Atom)