Here's a rough of the map for my cliche setting.  I haven't put down political boundries or the towns that act as the closest thing to capitals in the barbarian kingdoms to the North of the empire.  But it is the basic shape I was shooting for.  I may change it some.  For example, I may want to try making a political map showing the kingdoms and such. 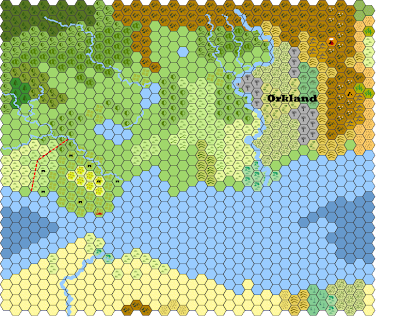 Have any of you read The Tough Guide to Fantasyland by Diana Wynne Jones?  I did years ago and thoroughly enjoyed it.  It is an encyclopedic list of fantasy tropes (read as cliches) written in a mock serious style that actually cuts the genre to the bone in a good way.  Here is an example:

Why do I bring this up?  Because my oldest son doesn't like playing in adventures I didn't create.  So I created a setting for Basic D&D for him to play in.  I can drop my own adventures into it (borrowing heavily from published adventures when my creativity fails.)  There is a problem though.  It is one giant cliche.  Did I say giant?  Pardon me for my imprecision.  It is one GINORMOUS cliche.  Seriously.  It hits many of the cliches mentioned in Tough Guide.

So, you get the idea.  Thing is I'm happy with this setting.  It's comfortable for me and the boys like the idea.  Now we just need to find time to actually play.

I'm working up a map for the campaign but I'm still trying to find the best way to get it out of my head.  When I do, I'll post it.