Abe Smith was born in 1870 in Ohio but moved West as a child. He experienced much of the tumult of that era. He knew gunfighters and warriors, settlers and sawbones. He also saw the closing of the frontier and the death of the Wild West. He worked many jobs in his youth: Cowboy, soldier in the Spanish American War, roughneck, prospector and even did some railroad work. Now in his sixties he is still a leathery tough and likes to play up his connection to the Old West through his mannerism and speech patterns and he certainly never turns away a whiskey. As a result he’s managed to get himself a job as a wrangler and sometimes technical advisor for a movie company that produces B grade cowboy shoot-’em up motion pictures. He has even had a few bit parts in the films as an extra. But that’s coming to an end soon. The movie company has fallen on hard times and he has received his layoff notice. What adventures are ahead of him?

“Yep, I knew both Wyatt Earp and John Wesley Hardin!”

I've never given much thought to Castles and Crusades. With all the other D&D clones/retroclones around, many of them for free, I didn't feel the need to part with the money. Now, though, DriveThruRPG is have a half off sale on Troll Lord Game products. Two of the three main rulebooks are half off. (They aren't discounting the Castle Keeper's Guide.) But I can get two for under $10.

So, does anyone have any experience with C&C? Good? Bad? Mediocre? Like? Dislike? Ambivalent?
Posted by Narmer at 2:43 PM 7 comments:

Email ThisBlogThis!Share to TwitterShare to FacebookShare to Pinterest
Labels: Castles and Crusades 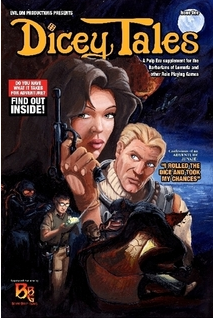 I have long planned to write a comprehensive, witty and incisive review of Dicey Tales. Due to my busy schedule and and general laziness when not busy, this hasn't happened. I have had to finally admit to myself that it is not going to happen. So, instead, here is a quick overview of the first issue of Dicey Tales and a couple of characters I created using its guidelines.

Dicey Tales is a periodical written and published by the Evil DM himself, Jeff Mejia. It is dedicated to supplementary materials for my favorite game Barbarians of Lemuria. The first issue covers 1930's pulp adventure and adventurers. It gives modified or new careers and boons for characters as well rules for firearms. It also covers magic and psychic abilities appropriate to the genre. The 85 page PDF (now available in hard copy as well) concludes with two nifty adventures heavy in pulp atmosphere so you can jump right into the action. It is my understanding that Future issues will cover different pulp genres such as science fiction and have other writers in addition to Mr. Mejia. It is also my understanding that this project has the blessing of Simon Washbourne, the creator of BoL. I really like this issue of Dicey Tales and am looking forward eagerly to future copies.

So, now the characters:

Carter Creek was a petty criminal in his youth. But not a very skilled one. Caught one too many times, the judge gave him a choice between prison or the military. Carter chose the military. Being a tough kid he managed to wrangle his way into the Marines. He became an excellent Marine and served with distinction in the Banana Wars of the ‘20s. It was during his service in Central America that he first heard rumors of lost cities and ancient treasures. When he mustered out eight years later he worked various manual labor jobs but quickly became dissatisfied with his lot. Using money he had saved during his military service, supplemented by his day job, he began to get an education. He was still captivated by the tales he had heard in the Marines and chose to study history. After years of study, he finally received his degree. Since then Carter has spent every possible moment scouring the jungles and hillsides of Central America, searching for treasure and always finding adventure.


Patrick Kelly grew up in a family of cops. His father is a cop, his uncles on both sides are cops, his brothers are cops. He never wanted to be anything but a cop. He didn’t even cross his mind that he could be anything else. It was a proud day for him when, surrounded by family, he became a cop. It wasn’t until then that the trouble began. You see, he believed the pious mouthing of his family. The words he had heard since he was a child: Honesty, Integrity, Service. He believed in those things. He was incorruptible and became quickly disillusioned. He saw the petty criminal activities of his fellow officers and became disgusted. It caused friction when he wouldn’t partake of the kickbacks and petty briberies that was the lifeblood and spending money of the rank and file.. He refused to take his share of the larger paydays that sometimes trickled down from the captains and lieutenants. It was rough but he stood steadfast. That is until his father came to talk to him about the trouble he was causing. It was in this way that he discovered his father and the rest of his family participated in the corruption. This broke him. He resigned, disavowed his family and began drinking heavily. He wandered and worked odd jobs, eventually becoming part of the crew of a tramp freighter. But he had copper in his blood. He eventually went back to the corrupt city of his youth, partially reconciled with his family and became a private detective. He hoped that he could do at least a little good in that capacity.

Boons
Cast Iron Gut
Serious Backup (His family and by extention, the police)

Equipment
Revolver
Suit
Flask
Posted by Narmer at 11:11 AM 1 comment:

I may have mentioned (or maybe not) that I received a Nook Color as an anniversary gift. I have some books, I've put some of my gaming PDFs onto it, it does light web browsing decently, has a few apps. In general I like it. Last night, on a whim, I did a search on RPG and role playing games in the Nook bookstore. And I'll be damned if there weren't some listed. It looks like Lulu has made some electronic copies of RPGs available for download. Including a few games by Simon Washbourne. I don't know if they are available for the Kindle or other formats but it was a pleasant surprise. Maybe others knew about this but I didn't.
Posted by Narmer at 5:41 PM 2 comments: