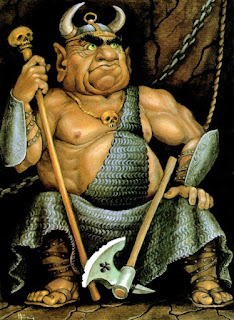 It is my hope that the new year treat you and yours well. May this be the year you finally defeat the Great Goblin of Gormest!
Posted by Narmer at 10:08 PM 1 comment:

For those of you interested in the new Advanced Fighting Fantasy here is a thread from RPG.net with some discussions and details.

Here are some new details from the publisher's website:

I'm rather excited about this.
Posted by Narmer at 1:15 PM No comments:

I hope the next couple of days are good ones for everyone. That family and friends are well and you get a chance to relax.
Oh, I hope you get good loot too!

Posted by Narmer at 4:04 PM No comments:

We are big fans of the board game Memoir '44 in the Narmer household. For those of you unfamiliar with this game it is a World War II game that uses figures to represent infantry, tanks and artillery. It doesn't attempt to be a strict simulation of WWII combat but intends to capture the flavor. It uses cards to determine what units can act. This is to try to capture the "fog of war" aspect of battle. It is part of the Commands and Colors series of games created by Richard Borg. I also own the Ancients version of the game but haven't had the opportunity to play it yet.
So, I was pleased to see that Avalon Hill (well, WoC) reissued the original game of the series, Battle Cry. Battle Cry is the Civil War version of the game. It went out of print be 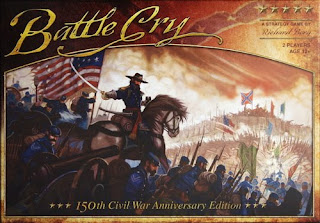 fore I was away it existed. The current version is billed as the 150th Anniversary of the Civil War edition. I don't think there have been any major changes but am excited to acquire it. I found out about it to late to get it on to my Christmas list though.
Posted by Narmer at 3:51 PM No comments:

Email ThisBlogThis!Share to TwitterShare to FacebookShare to Pinterest
Labels: board games

First, let me state that I haven't seen this movie. Second, I do not like horror movies. But t 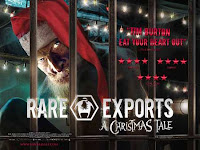 his movie sounds intriguing both as a movie and from a gaming perspective.
The movie, made in Finland, draws on old legends of a pre-Christian Santa Claus. And he ain't a nice guy. In the movie, Santa was buried in the ice and was recently dug up. Then the children started disappearing. According to reviews the film has a dark humor all its own.
When I read the review I immediately thought of this as a scenario for Barbarians of Lemuria. It fits the sword and sorcery genre perfectly. An ancient evil is uncovered and begins preying on the people of the area. The heroes have to track it down and face its unfathomable horror.
I wonder if I can pull this off.
Posted by Narmer at 2:55 PM 1 comment:

Its been all over the internet but, apparently, someone is going to bring out a new edition of Advanced Fighting Fantasy. Details are scarce but here is the announcement.
I think this is rather cool. Although I haven't actually had the opportunity to play this system I am rather fond of it. I would buy the new edition to replace/supplement my used copies.
Posted by Narmer at 12:18 AM 2 comments:

Two of my favorite novels are Goat Song and The Walled Orchard by Tom Holt. These two books are set in ancient Athens during the Peloponnesian War. The novels follow the life and adventures of Eupolis, a historical comic playwright. The first-person viewpoint entertainingly highlights Eupolis' cynical personality. What I enjoy the most however is how the author brings Classical Athens to life. Holt shows the lives and quirks of both historical characters and the city itself. One memorable scene illustrates the intensity of the rivalry between the playwrights as they competed for prizes at the various festivals. One contestant attempted to mine his way through the wall of Eupolis' house in order to sabotage his preparations.
So if you like historical fiction that both entertains and informs give these two books a try. The photo is actually of the omnibus edition that includes both novels.
Posted by Narmer at 11:31 PM 1 comment:

I love me some Firefly. I thought it was really cool when I read Mini-Six and discovered they included a serial-number free setting called "Perdition". I've been thinking about trying to persuade my gaming group to give Mini-Six a try. Probably using the "Imperium in Revolt" setting because my boy would go for that first.

You know, I really don't have much of a game related Christmas list. I've been on such a buying spree this last year that, at the moment, I don't have any/many gaming wants.
Here's what I have so far.
RPGs:
Jaws of the Six Serpents
Board Games:
Small World
That's it so far. I'll add more if I think of more.
Edit: I wouldn't mind having Hellas.
I'm always open to suggestions...
Posted by Narmer at 1:21 AM No comments:

There Can Be Only One 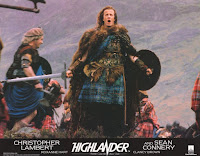 One of my favorite movies from the days of yore.
Is there anyone as pure badass as the Kurgan? Now there is a foe I would not want to face in an RPG. Or anywhere else for that matter. 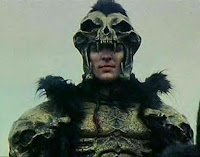 I ran across a blog today that, somehow, I haven't seen before. It is called Strange Stones and covers BoL/BotA, Traveller, and Labyrinth Lord amongst others. One cool feature is a Barbarians of Lemuria Meso-American type setting with bestiary. Take a look.
Posted by Narmer at 10:39 PM 1 comment:

Email ThisBlogThis!Share to TwitterShare to FacebookShare to Pinterest
Labels: Barbarians of Lemuria, Barbarians of the Aftermath, Labyrinth Lord, Other Blogs, Traveller

I've always loved a good time-travel/alternate history story and Lest Darkness Falls by L. Sprague de Camp is one of my favorites.

It is the story of American archaeologist Martin Padway who's visit to Rome is interrupted by a bolt of lightning. This somehow sends him back to 6th century Rome. He procedes to use his knowledge to introduce anachronistic technology into the ancient world and changes history.

I've always wanted to play in an RPG with a similar theme. I don't know what system could do this. I imagine many could. In the alternative settings chapter in Dogs of W*A*R, the author suggests transporting modern soldier and special ops types into the world of Barbarians of Lemuria. Not quite the same but loads of potential fun.