All three are on their way and I'm excited.
Posted by Narmer at 11:20 PM No comments:
Email ThisBlogThis!Share to TwitterShare to FacebookShare to Pinterest
Labels: D&D

Our old-school-type game of choice is Labyrinth Lord. In LL, clerics get a spell at first level. B/X D&D makes clerics wait until the second level before they get their first spell.

What is your preference? Comments are welcome but I've also put a poll up in the side-bar.
Posted by Narmer at 5:53 PM 2 comments:
Email ThisBlogThis!Share to TwitterShare to FacebookShare to Pinterest
Labels: D&D, Labyrinth Lord

I ran across the term "humanistic fantasy" while I was reading the primer for Rogue Games' Shadow, Sword & Spell. Here is their definition:

Humanistic fantasy is fantasy in which humans take the center stage. It is fantasy largely without the races familiar to fantasy today - elves, dwarves and the like.

This is the type of fantasy and fantasy role-playing game I prefer. It is one of the reasons I like Barbarians of Lemuria so much. Now I have a term for it.
So, why do I like humanistic fantasy so much? Good question. I'm glad you asked. I've been thinking about it since I read the primer. The only conclusion I have come to is that it is more about feeling than logic. It just doesn't feel right to me to have humanoids be a common occurrence. They should be rare and mysterious. Not something you see hanging out at the corner pub. So uncommon that, perhaps, they are endangered or even one of the last examples of their race. Just as I feel magic should be rare and dangerous, not something you use every morning to heat your tea. And, hey, these are characteristics of the sword and sorcery genre.
Oh, and my copy arrived today.
(As a side note, I googled the phrase and discovered that it is used frequently by religious folk to describe the world view of non-believers. But that's another story.)
Posted by Narmer at 11:14 PM 1 comment:
Email ThisBlogThis!Share to TwitterShare to FacebookShare to Pinterest
Labels: musings, Shadow Sword and Spell

A while back I wrote a post about using BASH so have my son practice multiplication. Well, it turns out that, for some reason, BASH didn't strike a chord with either of us. Don't know why but it didn't. Maybe it's because we like the simplicity of Supers! but that's what we're going to stick with. We'll try BASH again in a few months.
Posted by Narmer at 11:55 PM 1 comment:
Email ThisBlogThis!Share to TwitterShare to FacebookShare to Pinterest
Labels: BASH, musings

Some of you may know Robert Fisher has a blog where he talks about RPGs amongst other things. I ran across this archived piece he wrote about Classic D&D (i.e. B/X) and found it interesting. If you haven't read it, you may find it interesting too.
Posted by Narmer at 12:56 AM 1 comment:
Email ThisBlogThis!Share to TwitterShare to FacebookShare to Pinterest
Labels: D&D, musings, Other Blogs

D&D in My Imagination 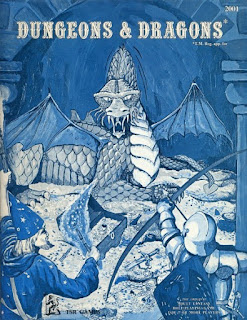 This is my response to Grognardia's post. Unlike many people I don't think of the lovely boxes the Basic games came in. My first D&D game was the Holmes Basic edition. I didn't remember that the box was color. What I remember is the blue rule-book cover and until recently I thought it was the box cover. So, this is what I think of when I think of D&D.
Posted by Narmer at 3:43 PM 1 comment:
Email ThisBlogThis!Share to TwitterShare to FacebookShare to Pinterest

So, my son's interest has wandered back to Labyrinth Lord, which is where we started our RPG journey.
He told me he wanted to play a dwarf. I had him roll six times and apply the results as he wished. This way he was assured a dwarf. A bit latter he told me he wanted the dwarf to be a prince and wield a bone long sword. He was worried about rust monsters, he explained. I could see making his character a prince but I had reservations about the bone sword. I thought that in order to be a sturdy sword the bone sword, or 'Bone Sword' as I started thinking of it, should be a magic sword. And I wasn't going to give a starting character a magic sword. So I decided he needed to go on a quest for it. But why? I determined that I would have to work it into the background of the campaign world somehow. Then I realized that I needed to create a campaign world, which I haven't done in 30 years.
And here is the result:
From the Granite Shield Mountains in the East to the Greycap Ocean in the West, the land of Kalonin was peaceful and happy. The Three People lived in harmony ruled by the Council of Three Kings, a dwarf, an elf and a human. They reigned with the assistance and advice of the Gathering, an assembly comprised of representatives of each of the Three People. The land was prosperous and few knew want. But this golden age was fated to end. Dark forces began to gather in the wastelands beyond the Granite Shield Mountains. A Necromancer of enormous power began to weld the fractious Orcs, Goblins and other vile creatures into a powerful army. To prepare his way, the Necromancer sent twisted humans, dark elves and greedy dwarves into Kalonin to spread the tendrils of Chaos. The agents did their job well. Soon dissension and distrust began to split the peoples and the Kingdom. The evil ones preyed on the weak and greedy of all the races. The land was on the verge of civil war when the Necromancer struck. The hordes of Chaos poured through the mountains and into Kalonin. The battles swept across the verdant land leaving destruction, ruin and anarchy in their wake. The armies of the Three Peoples fought valiantly but, because of the dissension, separately. The lack of unity hampered the defence efforts and prolonged the war. Both the Dwarf king and the king of the Humans fell in battle. The Elf king also fell fighting the Necromancer but with his dying breath he unleashed a powerful sorcery which allow him to vanquish the evil entity with the Bone Sword. Without the Necromancer's leadership, the remainder of the forces of Chaos were destroyed or dispersed.
Kalonin was devastated. The end of the war saw none of the breaches between the Three Peoples heal. Each group shunned the others. The Elves disappeared into the Great Northern Forest and the Dwarves withdrew into the valleys and tunnels of the Granite Shield Mountains. The Humans had been the most populous and had suffered the greatest loses. To this day they have not been able to refill the land and many abandoned towns and other ruins dot the countryside. There is still a Human king but his power is much diminished. He controls nothing beyond his shrunken capitol. The rest of the land is ruled by local lords and other strongmen. The Dwarf king still rules but the Elves did not replace their fallen leader and live in independent bands in their forest fastness.
And this is the background for my son's character, who as yet is unnamed. The character's father is the son of the Dwarf king's youngest son. Thus he is a prince but not a powerful one. His father has been charged with running an isolated iron mine. The work is important but not glamorous. A large band of orcs attack the mine, a prelude to a larger invasion. The Dwarves fight valiantly, but in the end, futility. Just before leading the remaining warriors in a final stand, the character's father tasks him with taking the news to the Dwarf king. He also states that he believes the Necromancer is somehow behind the attack. It is a harrowing journey but the character makes it and delivers the message. His grandfather, the king, is greatly troubled. He tells his grandson the story of the Bone Sword and that the sword disappeared after the final battle and no one knows its location. Then he sends him on a quest to find the sword.

I have a map of the kingdom in mind and will post it if I can create decent rendition of it.
What do you think?

Posted by Narmer at 10:17 AM 2 comments:
Email ThisBlogThis!Share to TwitterShare to FacebookShare to Pinterest
Labels: Labyrinth Lord

I saw this movie the other night. My opinion can summed by the title.
Other than the superhero aspect, this really isn't my type of movie. I don't usually watch movies with over-the-top, gratuitous violence. But, for some reason, I found a twelve-year old girl who can cut through a crew of drug dealers like a scythe through wheat very endearing. And then there's the goofy lead. And Nicholas Cage.
It just pushed all the right buttons for me.
Posted by Narmer at 11:45 PM 1 comment:
Email ThisBlogThis!Share to TwitterShare to FacebookShare to Pinterest
Labels: movies

Well, this is my 100th post. Time flies when you're having fun.

Simon Washbourne has a forum where people can discuss his games. On one of his threads the posted a challenge. The challenge was to create four characters for Supers! that incorporate one of the following into the character's name: Blood, Song, Sphere or Volcano. His challenge is in post 34 of this thread. Here is my first entry.
Colin Savage effectively became an orphan at the age of 5 when his father went to prison for life and his mother fell into an abyss of drugs and alcohol. Bounced between uncaring relatives and foster homes, he grew up a petty thief and a thug. One night he cornered a young woman in a dark alley. But things didn't go as expected. He was saved from a grotesque death by Commander Power, who happened to be patrolling in the area. The woman escaped when Commander Power realized how near death Colin was and rushed him to the nearest hospital instead of pursuing the her. Colin made a near-miraculous recovery from his wounds in a very short time. Slowly, over the next several week his powers, and the thirst, manifested themselves. Now called Blood Fiend, Colin is gathering minions in a bid to make himself the dark lord of Supersville's criminal underworld.
Blood Fiend
Resistances
Composure 2D
Fortitude 3D
Reaction 2D
Will 3D
Aptitudes
Intrusion 3D
Streetwise 2D
All the Rest 1D
Powers
Vampiric Powers 4D
Mind Control 4D
Flight 1D
Super Senses
-Heightened Scent 1d
-Night Sight 1D
Super Strength 2D
Ads
Charismatic
Disads
Addiction - Blood
Posted by Narmer at 5:38 PM 3 comments:
Email ThisBlogThis!Share to TwitterShare to FacebookShare to Pinterest
Labels: characters, names, Supers
Newer Posts Older Posts Home
Subscribe to: Posts (Atom)