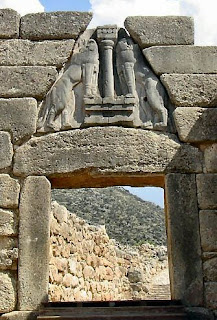 I was reading through my copy of Gurps Greece the other day when it struck me. Heroic/Homeric/Bronze Age/Mycenaean Greece would be a great setting for Barbarians of Lemuria. Think about it. The heroes of the time were larger than life, kick butt types. Think of Hercules or Achilles. Or they could be extremely wily as Odysseus was. Most of them did not use magic directly though some used magic-type items. The items the gods lent Perseus fall into this category.

Also you could scale the level of fantastic to suit your tastes. You could play it almost strictly "historical" by having inter-kingdom conflict, trade and social interplay be the main focus of the game. You could include realistic depictions of the sources of the myths. The origin of the centaur myth comes to mind. Or you could take it up a notch to include some of the real creatures faced by various heroes. I'm thinking of the Nemean lion, the various boars and bulls, the terrible birds, etc. Real creatures made particularly fierce or nasty. Or you could take it up another level by including the non-realistic creatures such as the Minotaur or the hydra. And finally you could have a full blown fantasy world including meddling gods, an array of monsters, and weird demi-humans. Or you could mix-and-match to taste.
Has anybody thought of this in connection with Barbarians of Lemuria? Has anybody created stats for Greek heroes? How would you stat up Hercules, for example? Any thoughts, comments or suggestions?
I also posted this on Rpg.net here.
Posted by Narmer at 12:44 AM 6 comments:
Email ThisBlogThis!Share to TwitterShare to FacebookShare to Pinterest
Labels: Barbarians of Lemuria, Bronze Age, settings

I like the Supers! Sourcebook. It contains a few optional rules, four new powers and a boatload of NPCs. My son grabbed it, read it and immediately wanted to make a new character that incorporated one of the new powers. And thus we started our Supers! campaign afresh.
He named his character Ken. Ken is an 18 year old who does not remember his past. He wakes up in a dumpster in an alley. A woman is being robbed by a band of thugs. Ken rushes to her aid and gets into a fight with the five guys. During the fight Ken discovers he has superpowers. He has super-strength and can mimic/become any substance he touches. (My son is a big fan of Ben Ten.) He turns to concrete and puts the thump to the bad guys, knocking three out and driving the other two off. He is making sure the woman is OK when the two that ran away come back with a big dude. Another fight ensues and Ken is victorious. In the meantime the woman called the police and they arrive just as Ken defeats the big guy. The police take the woman's story and take Ken and the bad guys to the station. The large, muscular but kindly Detective Kenyon talks to Ken in a room with a softly glowing green light. After being unable to determine Ken's identity the detective refers Ken to the home of a Mrs. Smith. Mrs. Smith takes in boys who are having problems, housing and feeding them until they get back on their feet. End of session one.
Ken
Resistances
Composure 2
Fortitude 2
Reaction 2
Will 2
Aptitudes
Fighting 2
Streetwise 2
Shooting 2
All the Rest 1
Powers
Mimic Substance 6
Super-Strength 6
Ads
Tolerance
Disads
Poor
Posted by Narmer at 1:15 AM No comments:
Email ThisBlogThis!Share to TwitterShare to FacebookShare to Pinterest
Labels: characters, Supers
Newer Posts Older Posts Home
Subscribe to: Posts (Atom)