I Have a Local Game Store!

I just discovered that I have a local game store now. A game shop that I visited infrequently that was located about 20 miles away has moved to about three miles down the road. I need to visit and see if they still have the same selection.
Posted by Narmer at 8:07 PM No comments:
Email ThisBlogThis!Share to TwitterShare to FacebookShare to Pinterest
Labels: game stores

I Love this Picture 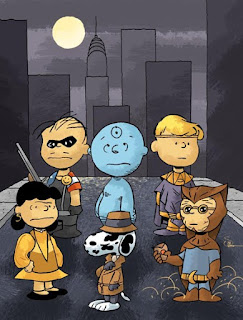 My two favorite graphic novels are Watchmen and The Dark Knight Returns. Thus I love this picture.
Posted by Narmer at 8:11 PM 4 comments:
Email ThisBlogThis!Share to TwitterShare to FacebookShare to Pinterest
Labels: Batman, musings, Watchmen

Dragonflight, the Seattle gaming con, was this last weekend. I didn't get to go. I was in Spokane visiting in-laws. (Truthfully, I probably wouldn't have been able to go anyway but it makes a better story this way.) All was not lost however. I managed to sneak away for awhile and hit Merlyn's, a local game shop. I'm glad I did. It was much larger than I expected. It carries a selection of both new and used rpgs, board games and comic books. It has a small selection of science fiction books and a gaming area that took up a third or more of the floorspace. The staff was helpful, asking if I was finding everything but leaving me alone most of the time. When I did have questions about a game or a comic book issue the clerk was knowledgeable and helpful. Overall I really liked the store. I bought a copy of Foundation Transmissions, a supplement for Thousand Suns, a game I own in pdf form but haven't had the chance to read yet.
Posted by Narmer at 2:02 AM No comments:
Email ThisBlogThis!Share to TwitterShare to FacebookShare to Pinterest
Labels: game stores, Thousand Suns 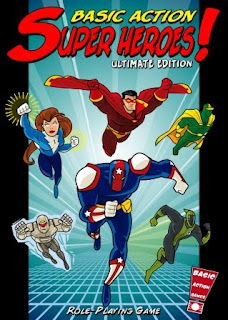 We love Supers! at our house. If you follow this blog you probably know it is our most played game followed by Barbarians of Lemuria. Both of my boys are good at mathematics for their age. My oldest son, however much he grasps the concepts of math and the beginnings of algebra, he does not like rote memorization. Thus he at times has trouble with the upper multiplication tables. I can completely understand this because I went through the same thing.

Supers! relies on addition. You roll a handful of dice and add them up. This is good practice for my six-year old. He's getting good at glancing at a group of dice and knowing the total. Now since the superhero genre is so popular amongst the younger generation here I am planning to order the new addition of BASH (the old edition didn't do anything for me but reviews have good things to say about the improvements and expansions to the new edition.) BASH relies on multiplication for dice results. Roll two d6s and multiply by attribute or skill. This will be perfect for my older son. He will be practicing his multiplication skill under the guise of defeating villains. (And this is actually one of the stated goals the author of the game had for the original edition.) I told my wife about this and she was enthused. So, instead of buying just the pdf I am buying the hardcopy too.

An enjoyable game, educational benefits and spousal approval. I love it when a plan comes together.
Posted by Narmer at 3:16 PM 3 comments:
Email ThisBlogThis!Share to TwitterShare to FacebookShare to Pinterest
Labels: BASH, musings

I was disappointed to read this post by J.B. over at B/X Blackrazor. I feel even worse because I live about 45 minutes or so away. Perhaps I'll be able to make it down for a little gaming one weekend. The problem is I work every other weekend (I worked the day he's talking about) and family obligations keep me close to home on my days off.
Posted by Narmer at 2:38 PM 2 comments:
Email ThisBlogThis!Share to TwitterShare to FacebookShare to Pinterest
Labels: game stores, musings, Other Blogs

I asked my 10 year old which he liked better, being the player or the gm. Without hesitation he answered gm. I asked him why? He replied that as gm he was the ruler of the world. I'm glad I can contribute to his budding megalomania.
Posted by Narmer at 2:19 PM No comments:
Email ThisBlogThis!Share to TwitterShare to FacebookShare to Pinterest
Labels: musings 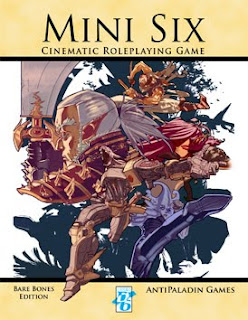 AntiPaladin Games has revised their Mini-Six rules and posted it to their website. Mini-Six is a cool little generic D6 derived game that seems simple and flexible. You can find it at their website here.
Posted by Narmer at 2:44 AM 1 comment:
Email ThisBlogThis!Share to TwitterShare to FacebookShare to Pinterest
Labels: d6, Mini-Six

Hylas Jones and the Cup of Heracles

My son and I have played two sessions of our Percy Jackson and the Lightning Thief based Supers! game. My son has read all five books in the series and movie is currently his favorite movie of all time. I've read half of the first book in the series (so far) and have seen the movie. So I'm winging it a bit as the GM. For those of you not familiar with the series, Percy Jackson is a half-blood. His father is the Greek god Poseidon and his mom is a mortal. The Greek myths are true and fantastical creatures exist. Oh, and the Greek gods migrate with the center of the Western World. So the current Mount Olympus is located on the 600th floor of the Empire State Building.
Here's the set up:
Hylas Jones is twelve years old and his best friend is named Mac. (I gave my son a list of ancient Greek names and Hylas is what he picked. I picked Jones because he couldn't think of a last name.) Hylas doesn't know it but his father is the god Zeus.
The call to action (literally):
Hylas receives a phone call at school from his mom. She orders Hylas home immediately and tells him he needs to bring Mac. Mac (also twelve) recognizes the urgency of the message, gets a motorcycle and drives them to Hylas' apartment. The place has been ransacked. The boys find a note from Hylas' mother. It says that "the Cup" has been stolen and she has gone to recover it. Hylas doesn't know about any cup but Mac tells him it is an important gift from his father. Neither Hylas nor Mac have any idea where she has gone. Mac, however, says he knows someone who can tell them. They need to go to Delphi, Ohio to talk to a fortune-teller.
The journey:
Hylas doesn't know how they will get there but Mac says he'll drive. He comes back a short time later with a car. After gathering supplies they drive off. They drive all day and stop late in the evening. They sleep in the car. Hylas wakes to the sound of Mac leaving the car. He says he needs to use the bushes. While Mac is gone a van pulls up and five men in long black coats get out and surround the car. When Hylas gets out they try to grab him. Hylas fights back as best he could. Mac comes out of the bushes and yells for Hylas to run. Hylas hightails it out of there. After he hits the forest and hides, he hears a bellow from behind him. He eventually hears footsteps coming toward him. It's Mac. Mac says the men are gone. He tells Hylas that he threatened to call 911 and the men left. After hours of driving they finally reach Delphi. They find the fortune teller's shop and enter. She seems to know them and refers to Mac as Maceros. It is smoke filled and the lady, Mac keeps calling her Pythia, sits them down and asks them their business. Hylas explains that they are looking for his mom. Pythia goes into a trance and says that she sees his mom in an underground city in his home town (Seattle). But they will need the key to get her. When they leave Mac gives her some odd coins.
Mac tells Hylas he knows where to get the key. It is at the national mint in Denver. They travel for awhile but then Mac pulls over into an isolated field and says that they need to talk. He tells Hylas he is not a normal kid. He is the son of Zeus and he has special powers. Hylas doesn't really believe him until Mac flattens his rather voluminous hair and show Hylas small bull horns. Mac tells Hylas that he is his protector and that he's not really twelve. The cup they are looking for is the Cup of Heracles. The cup was a gift from Zeus to Hylas' mother. The cup protected Hylas from supernatural beings. He then teaches Hylas how to use his powers. Being the son of Zeus the powers are electricity bases. After a little practice they drive on. Several hours later they stop so Mac can use the bushes. Suddenly 16 men in black coats appear. They state that they are the Myrmidons. They take off their coats and are wearing bronze armor, have shields, spears and bronze helmets. They attack. Hylas uses his control of electricity to blast away at the men. He defends himself with his fighting ability. Suddenly a bull burst forth from the foliage and attacks the men. Between the two they defeat the men.
And my son is looking forward to session three.