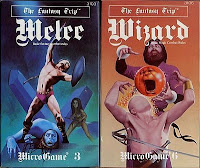 I'm stoked about this.  The Fantasy Trip with Melee/Wizard is coming back. As I've mentioned before my roleplaying experiences started with Melee and Wizard.

http://www.sjgames.com/ill/archive/April_17_2018/Take_The_Fantasy_Trip_With_Melee_And_Wizard_
Posted by Narmer at 5:34 PM No comments:
Email ThisBlogThis!Share to TwitterShare to FacebookShare to Pinterest
Labels: Melee, The Fantasy Trip

Helms Will Be Dented!

I was thinking about helmets in White Box and other OSR games and how, for the most part, they are treated as window dressing.  Then it struck me.  I really like the Shields Shall Be Splintered houserule so why not apply it to helmets!  I hadn't run across it before. 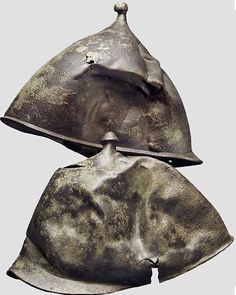 I thought I had come up with something original but of course I hadn't.

My thought was that characters could negate the damage from a single blow by sacrificing their helmet.  The helmet would be rendered useless and the character would be dazed for 1d6 turns, being able to only take defensive actions during that time.

I was excited until I started doing searches.  Of course others had thought of the idea.  Oh, well.  I like it and I think I will incorporate it.  It will make helmets useful and give characters a reason to purchase them is they so choose.
Posted by Narmer at 4:02 PM No comments:
Email ThisBlogThis!Share to TwitterShare to FacebookShare to Pinterest
Labels: Swords & Wizardry

I observed a group of friends playing a game of 5e a couple of weeks ago.  It was fun and interesting.  Their characters are all around 10th level and seemed pretty powerful to me.  They were in some kind of temple trying to stop some cultists from completing a ritual which included human sacrifice that they knew would have some sort of dire consequences though they didn't know exactly what.

Long story short, they inadvertently helped complete a certain portion of the ritual, they killed a lot of cultists, a giant demon dude was summoned from hell through a portal and they defeated him by using some magic spell to push him back through and then sealed the portal.

I understood most of what was going on though some of the exact details went by me.  It all seemed fun.  My main criticism was that the combat took longer than I expected.  I don't know if that was just my perception, the particular encounter or if it is typical for 5e.
Posted by Narmer at 3:37 PM No comments:
Email ThisBlogThis!Share to TwitterShare to FacebookShare to Pinterest
Newer Posts Older Posts Home
Subscribe to: Posts (Atom)