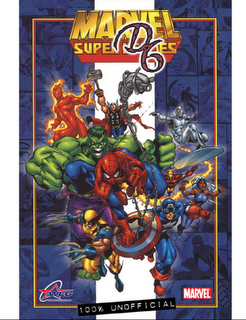 I ran across something interesting in my travels through the interwebs. Someone has done a d6 conversion of the classic TSR Marvel Super Heroes RPG. The document is 18 pages long and states it is not a complete game. You will need a copy of the D6 Adventures book. It tries to adhere closely to the MSH rules and feel but I can't really comment because I don't have any real experience with MSH.

You can find the d6 MSH and other Open D6 material, including the D6 Adventure book, here.
Posted by Narmer at 2:25 PM 3 comments:
Email ThisBlogThis!Share to TwitterShare to FacebookShare to Pinterest
Labels: d6, super heroes 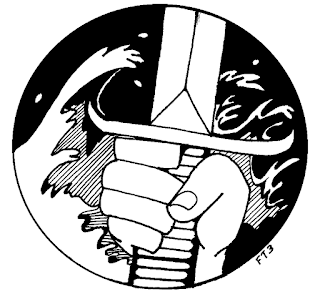 When I heard that G-Man was going to create a Barbarians of Lemuria adventure set in the Hyborian Age of Robert E. Howard, I was excited. I have very much enjoyed his previous adventures and since Hyboria is one of my favorite literary settings I figured that it would be a great adventure. My excitement wasn't misplaced, it is a great little adventure.

The characters are the survivors of a ship that wrecked off the coast of Shem. They discover two ships on a nasty reef that seems to draw ships towards itself. As usual I don't want to give much away but the adventure involves pirates, treasure, Stygians and magic foul. As is his practive, G-man has included several helpful appendixes. These include the full stats for important npc's, random treasure tables and pregenerated characters that can be used for the adventure. The last appendix branches out and includes the full stats for the npc's for the Basic Roleplaying.

I really like this adventure and appreciate that G-Man shares the results of his labors with the rest of us. Crimson Shoals would work great as a one-shot or as the springboard for further adventuring in the Hyborian world. Also, Hyboria is a perfect setting for BoL. If you are a fan of the game or the fiction, I believe will enjoy this adventure. I only hope G-Man has the time to create another adventure in this setting.
Edit: You can find the PDF here.

I snagged the artwork from the cover. It is again the work of Floyd Thompson, III.
Posted by Narmer at 11:16 AM 4 comments:
Email ThisBlogThis!Share to TwitterShare to FacebookShare to Pinterest
Labels: Barbarians of Lemuria, G-Man Adventures, Robert E. Howard 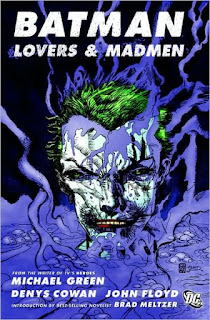 Warning! This post contains spoilers! Key plot points are revealed below!
OK. You've been warned. Batman: Lovers and Madmen is set early in Batman's career. He is feeling a bit smug because he has cleaned up Gotham and the streets are safe again. He knew ability applied correctly, logically would win the day. But then a new criminal appears. A man called Jack. Logic does not apply to him. His crimes and murders, though they could be well planned, are, in a word, crazy. Batman has troubles dealing with this. Logic does not apply. At the same time, Bruce Wayne, seeking balance in his life, begins a relationship with a beautiful museum guide. Of course the two parts of his life collide and Jack gravely wounds the woman. Batman stays with her instead of chasing Jack. But Batman wounds Jack on both cheeks with his razor sharp batarangs to let him know it is not over.
Batman is at a loss. His logical style of crime fighting is not succeeding against Jack. Batman is feeling inadequate, feeling like a failure. He comes to the conclusion that the only way to deal with Jack is to remove him. Permanently. Not being able to do the deed himself, Batman uses his contacts with the underworld to put a hit on Jack. Even other criminals dislike Jack. Well, the hit fails, Jack falls into a vat of pharmaceuticals and becomes the Joker. Batman has created a creature even more monstrous than Jack was. In order to focus on his quest to eradicate evil and not endanger loved ones, Bruce Wayne plays the cad and breaks off his relationship with the woman.
My verdict? I hated this graphic novel. Hated? Maybe despised is a better world.
And of course, I will tell you why:
I can accept Batman in his many versions. Dedicated Batman. Scary Batman. Genius Batman. Techno Batman. Hardcore Batman. Slightly unbalanced Batman. Even funny Batman. But the one thing Batman despises is killing. And this version of Batman takes out a freakin' hit on Jack! I cannot swallow this and reject it. Even in The Dark Knight Returns where Batman is the direct cause of the grievous wounding and perhaps the death of at least one criminal, he does not actively seek the death of the criminals. In fact one of the moral choices Batman faces is whether to kill the Joker or not..
So, despite the excellent characterization of Jack/the Joker as a psychotic, I cannot and will not enjoy this book because, in my opinion, it does not stay true to the essence of the character of Batman.
Posted by Narmer at 1:06 AM No comments:
Email ThisBlogThis!Share to TwitterShare to FacebookShare to Pinterest
Labels: Batman, musings 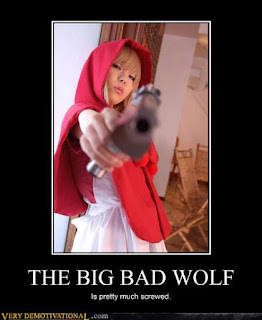 Saw this over on I'd Rather Be Killing Monsters... and for some reason this really strike a cord with me. Maybe it has something to do with turning a paradigm on its head.
Posted by Narmer at 3:53 PM No comments:
Email ThisBlogThis!Share to TwitterShare to FacebookShare to Pinterest
Labels: Other Blogs
Newer Posts Older Posts Home
Subscribe to: Posts (Atom)