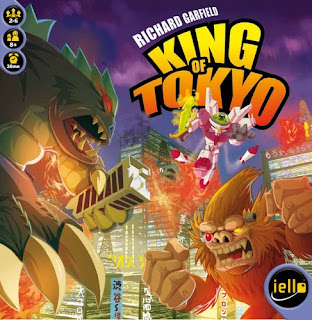 The big winner this Christmas, game wise, is King of Tokyo. This game first came to my notice when I read a post on GeekDad. My youngest is a big fan of the original King Kong and Godzilla. So I thought this would be a great game for him. And it is.
In King of Tokyo you are a giant monster on the rampage in Japan. Your goal is to either wreck a large portion of Tokyo or destroy the other monsters. You do this by accumulating 20 victory points or reducing the health of the other monsters to zero. This is a dice driven game that uses six special dice to determine how much damage you do to other monsters, how many victory points you gain and how many energy points you get. Energy points allow you to buy cards that give you special monster powers such as Solar Powered which allows you to gain an energy point if you don't have any. There is a small game board which shows Tokyo. A monster is either in Tokyo or not and only one monster can be in Tokyo at a time (except in games with 5 or 6 players.) When in Tokyo you gain extra victory points but the downside is you become the target of all of the other monsters attacks.
All in all this is a fun game. It has a heavy random component with the dice but there is some strategy involved. Mainly, whether to stay in Tokyo or bail. Everyone in my family enjoys playing including my wife who is often reluctant to play board games.
Posted by Narmer at 9:33 AM
Email ThisBlogThis!Share to TwitterShare to FacebookShare to Pinterest
Labels: board games, Other Blogs