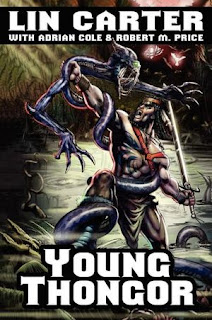 I often hear that an rpg or a setting is based on such-and-such with the serial numbers filed off.  I hear this a lot in reference to BoL.  Let me tell you though, BoL's  author Simon Washbourne filed very lightly when creating this game.  It is my understanding that his original version was actually a Thongor game but he couldn't get permission from Carter's estate to run with it.  But BoL is the closest you can come without actually having one.  I think Mr. Washbourne did an excellent job capturing the feel of the stories and sword & sorcery in general.  This only makes me appreciate the game more.
Posted by Narmer at 11:23 PM
Email ThisBlogThis!Share to TwitterShare to FacebookShare to Pinterest
Labels: Barbarians of Lemuria, books, Inspiration, Lin Carter, Simon Washbourne