I don't think about gnomes much.  In fact I don't think about them at all unless I'm somehow forced to.  However, I am currently planning a 1-on-1 campaign with a co-worker to play during lunch breaks.  She always plays gnomes in her other games.  It apparently stems from an incident years ago when she inadvertently allowed a large number of gnomes to starve to death in a pit.  She chose to not open one last door before turning back towards civilization because she heard noises on the other side.  R.I.P. gnomes.

In my campaign (which I may detail later) there are no gnome PCs so she chose to play an elf.  I was going to leave gnomes out entirely but then I thought, hey, why not, I will include gnomes as NPCs but they will be...different. 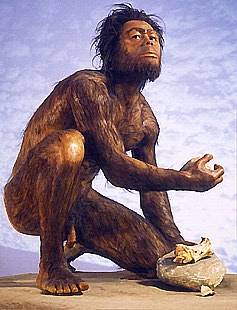 So, here they are:


A gnome is the unfortunate offspring of a dwarf and a halfling.  They are hairy of feet and hairy of face and are neither fish nor fowl and thus accepted by neither group. They seem to inherit the worst traits of both parents.  They are grumpy, gluttonous and greedy.  They live underground like their forebears but to quote Tolkien the typical gnome lives in "a nasty, dirty, wet hole, filled with the ends of worms and an oozy smell".  As a result they are grubby and extremely malodorous.  In fact the easiest way to find a gnome hole is to follow the reek.  To top it off, gnomes are infertile and often their genitals are nonfunctional.  They dislike the world and everyone in it but, luckily, they are solitary creatures.  Fortunately, there are very, very few of them.

Here are the stats for White Box: